Are You Better Off Now Than You Were 50 Years Ago?

On July 2, 1964, Lyndon Johnson sat down in front of an array of leaders in Congress and the Civil Rights movement to sign the Civil Rights Act of 1964. The law, he acknowledged, would turn the South Republican for a generation, but it was too important not to sign. He said that because he knew southern white voters would feel a sense of loss as their black and brown neighbors gained rights and status in the country and that they would blame Democrats for stripping away their supremacy. LBJ was spot on, and the Civil Rights Act was not the only instance of societal change since then. Women have gained increased rights to make their own healthcare decisions, LGBT Americans have gained increasing acceptance in society, and the Vietnam War effectively brought an end to the military draft. We’ve also seen massive shifts in economic dynamics in terms of automation and globalization. At each major milestone there were people who saw progress and felt left behind and people who saw progress and felt more free.

Alan Abromowitz’s new book “The Great Alignment” asserts that one of the best ways to differentiate between Republicans and Democrats is to measure the degree to which a person feels that things have gotten better for people like them in the last 50 years. The positivity or negativity of reaction to the progress of the last half century is a really intriguing dichotomy to me. So I dug into the Pew 2018 Typography survey to learn more about people on either side of that question.

Among other questions, the survey offers respondents a series of choices between sets of statements. For example, a respondent may be asked to choose between the following two statements:

The results reveal a lot about the people answering them. Many questions appear to have broadly similar outcomes, but differing degrees of support for certain statements. Others illustrate polar opposite sets of opinions. There are two sets of attitudes I want to explore: attitudes towards immigrants and attitudes on economic issues. 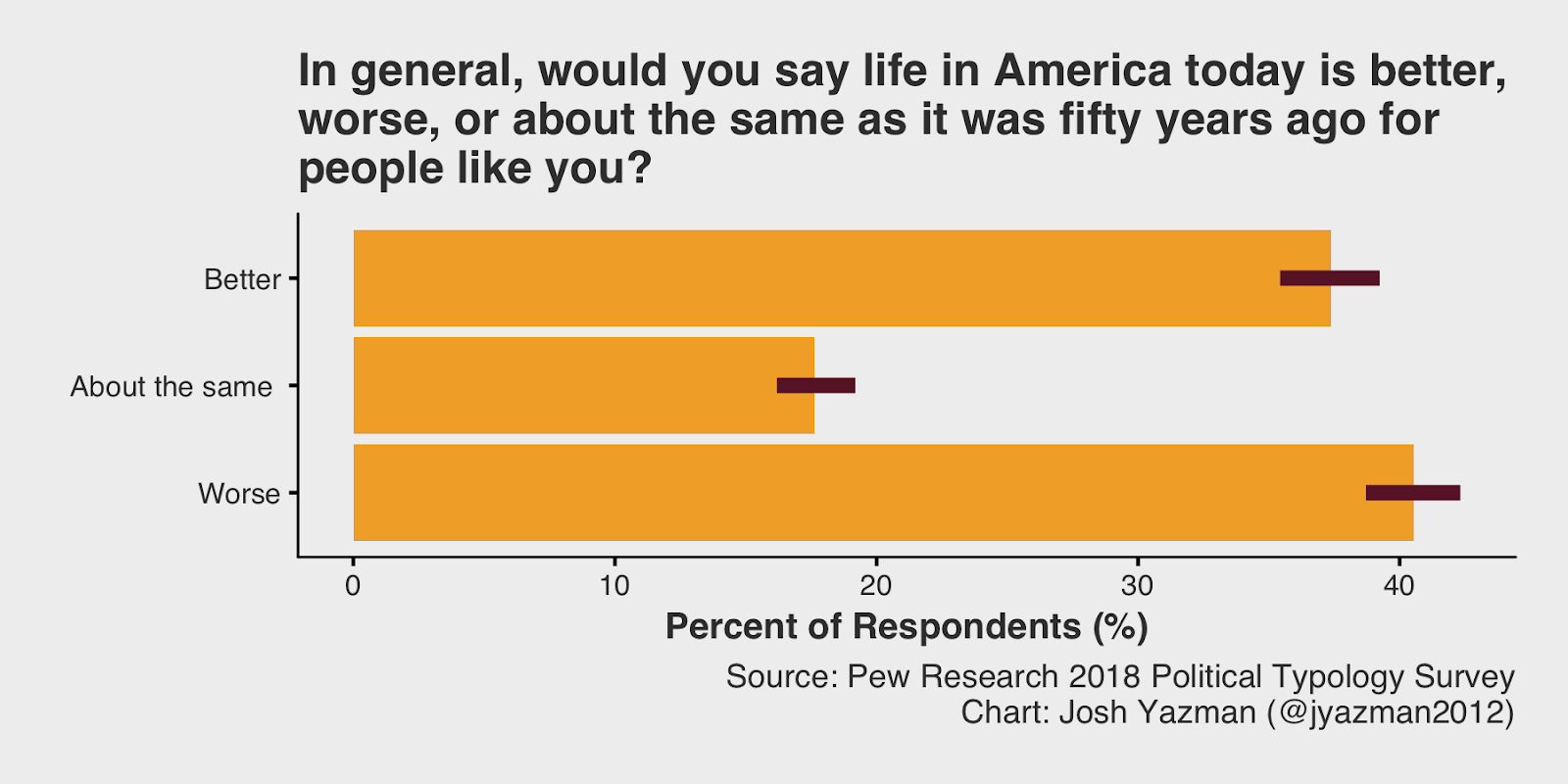 People who think life has gotten worse tend to be more likely to regularly attend religious services, skew older, and are more likely to be male - all demographics we typically associate with conservatives and Republicans.

In one question, survey respondents are asked to pick between the following two statements: 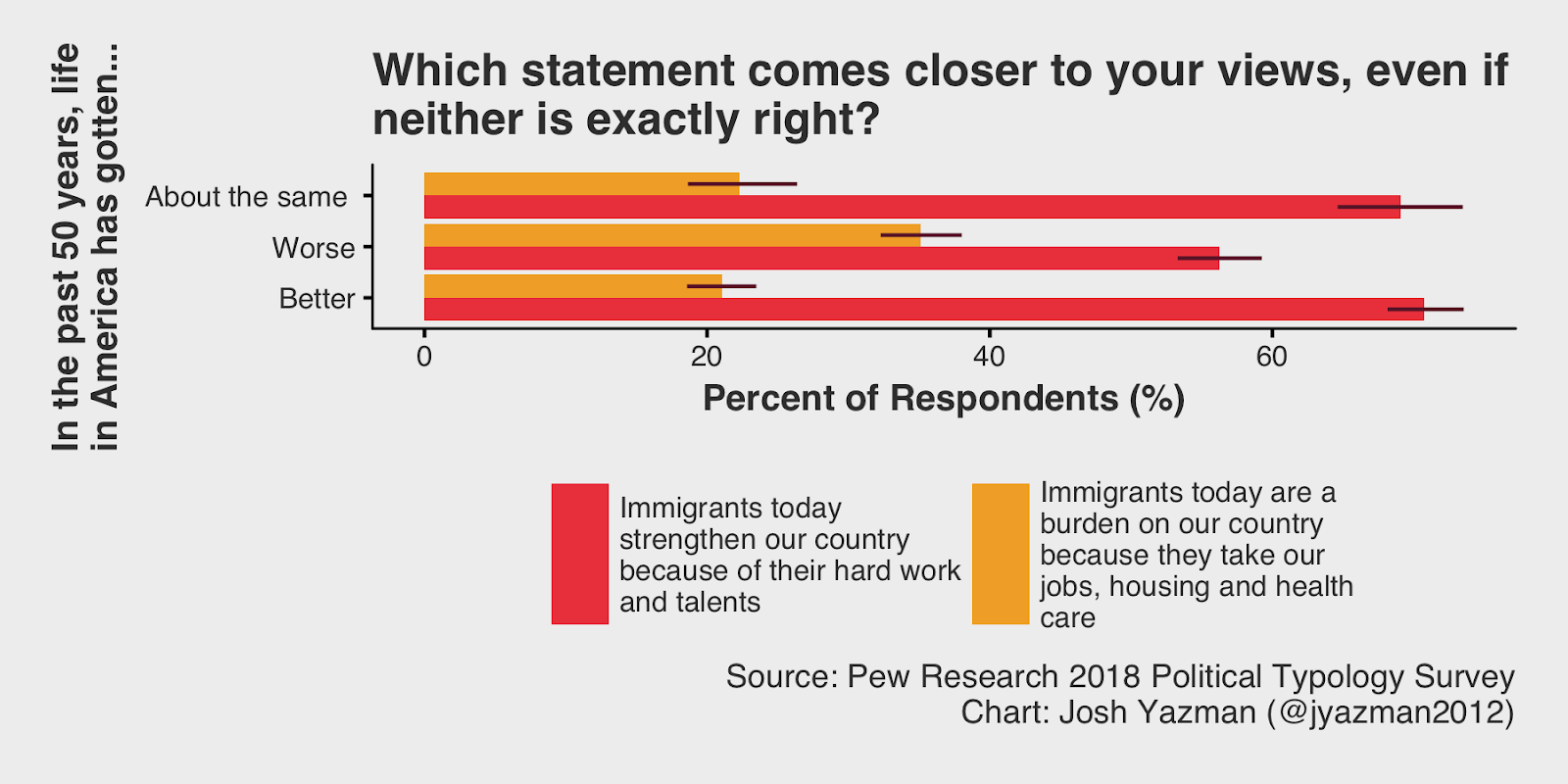 On a wide array of economic issues, voters who feel badly about the past 50 years don’t always align with conservative principles as we commonly know them. They generally dislike government regulation in particular, but support expansion of the role of the federal government.

Starting with government regulation, respondents are asked to pick between the following two statements: 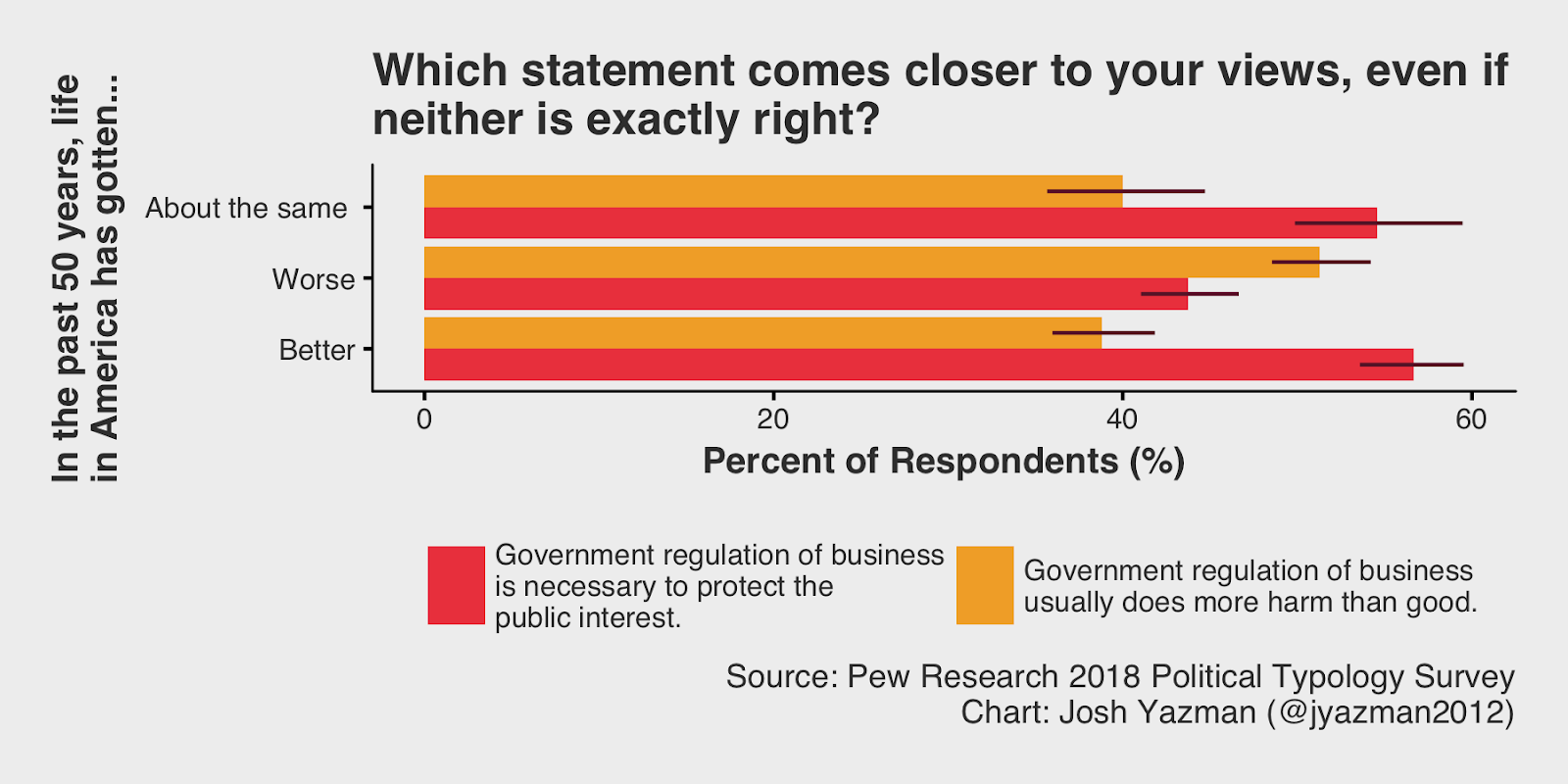 That said, on a host of questions, those who feel like life has gotten worse for people like them express greater empathy for the poor, more distaste for corporate profits, and less faith in the ability to get ahead through hard work compared to those who think life has gotten better.

On poverty, respondents are asked to choose between the following statements: 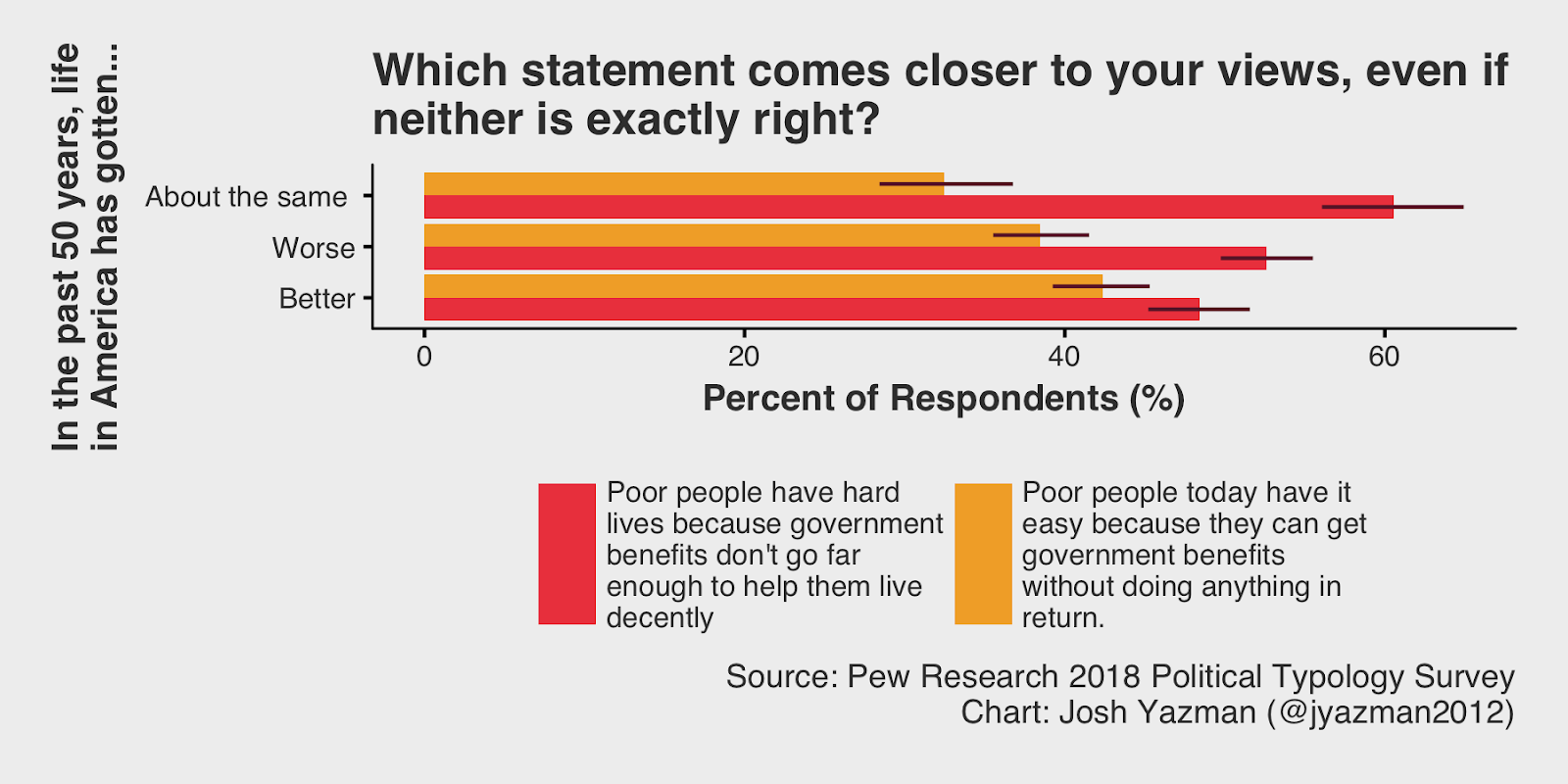 Similarly, all groups of respondents believe corporate profits are excessive, but differ in the degree of agreement when asked to choose between the following statements: 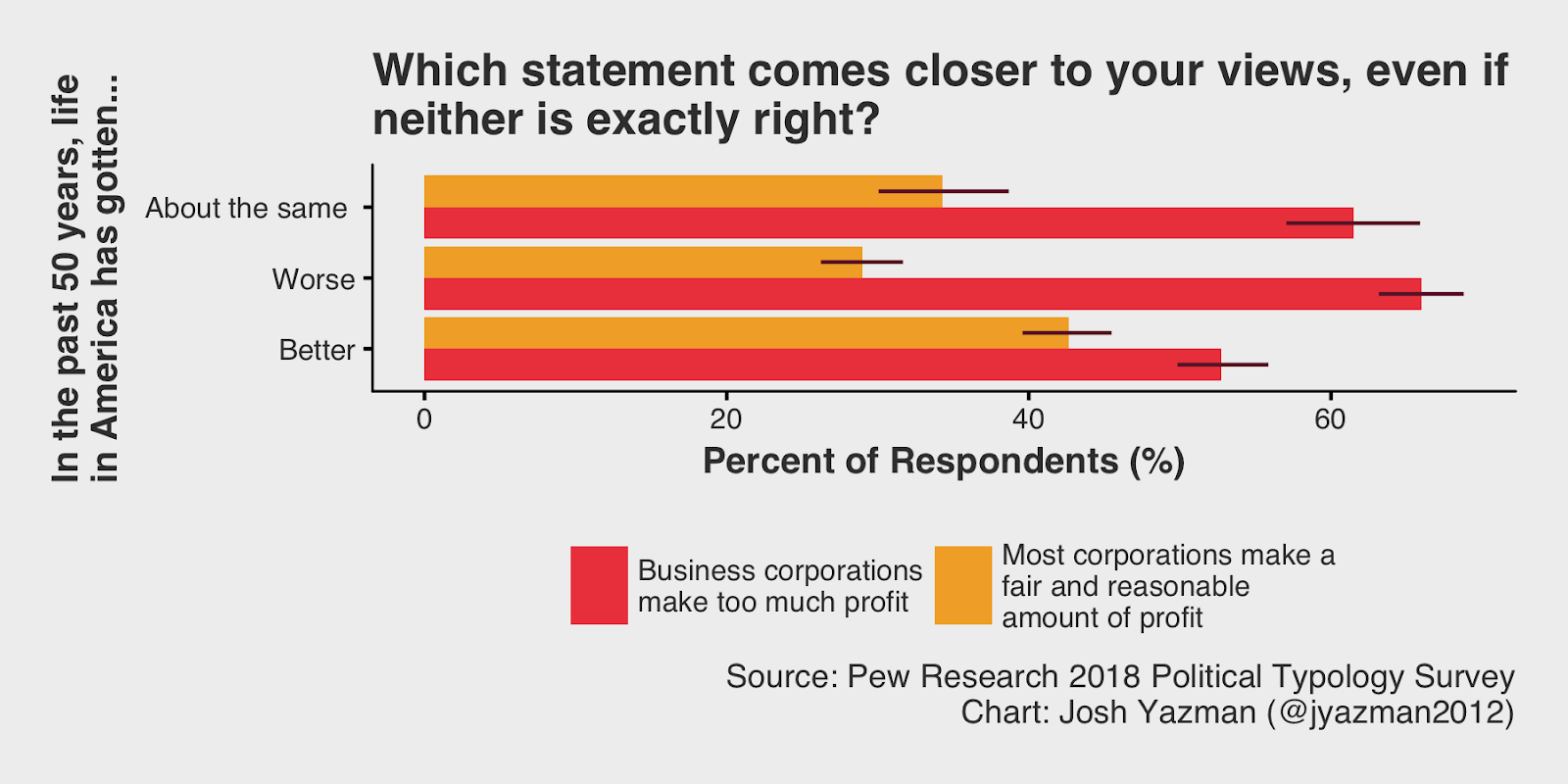 The last question I’ll dig into is one of the sadder ones: 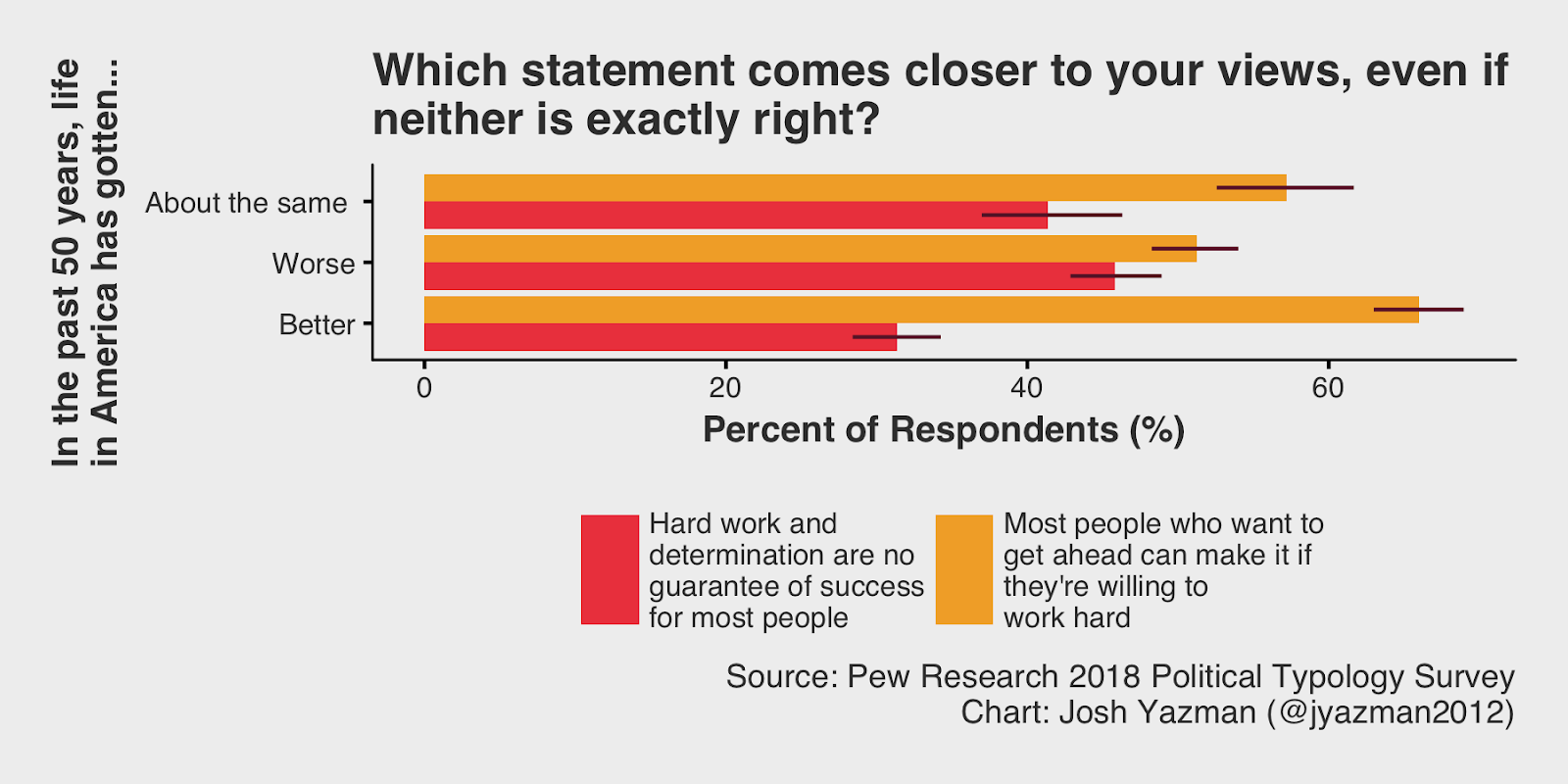 The past 50 years have seen accelerated progress in race relations and a host of other aspects of American culture. Those changes have been paired with increases in economic efficiency driven by companies innovating technologically and automating massive segments of the American workforce. Some people feel like our changing culture and economy are positive improvements for American life and others feel like societal change has made life worse. Divergent views on immigration and economic issues highlight the differences between them.