Looking Ahead to Virginia in 2017

One of the first chances Democrats will have to strike back against Trumpism will be the statewide races in Virginia for Governor, Lieutenant Governor, and Attorney General.

One recurring theme in 2016 post-election analysis and punditry has been that Clinton subordinated her economic message to talk about promoting America’s diversity, costing her white working class voters in key states. Much of that analysis is focused on states like Ohio, Pennsylvania, Michigan, and Wisconsin (and is quite possibly wrong anyways), but Virginia voted strongly for Hillary Clinton so it’s important to rigorously assess diversity as a part of the political landscape in the commonwealth separately going into 2017.

People like Jim Webb argue that Democrats need to stop focusing on “diversity programs” and focus solely on economic messaging. But Virginia Democrats shouldn’t abandon messages of inclusiveness in the new year.

Underlying racial diversity and population change have been far better explanatory factors for changes in the Virginia political environment than have economic indicators like changes in median income or income inequality. While racially homogeneous areas have been rapidly moving away from Democrats, diverse areas have been growing rapidly enough to sustain statewide victories. None of this is to say that candidates shouldn’t talk about pocketbook issues like Medicaid expansion or addressing income inequality as matters of policy, but running away from the commonwealth’s diversity is not a winning strategy.

One way to measure the relative diversity of a geography is the USA Today Diversity Index which is essentially a percentage probability that two people selected at random will be of different races. This analysis classifies counties based on what their diversity score was in 2000 and how much that score has changed since then.

The bulk of Virginia’s diverse counties today are located in the southeast and northern regions of the commonwealth while the fastest changing parts of the state are in the Southwest. Of the diverse areas in 2000, Northern Virginia has continued to diversify as its population has grown while Southeast Virginia hasn’t changed much. Less diverse areas have increasingly abandoned the Democratic party (in line with national trends) but population growth in diverse areas more than make up the difference.

Democrats have won all but three statewide races since 2001. The main engine of the party’s statewide advantage over the years has come from population growth in diverse counties. Fairfax County, for example, has grown from 985,447 citizens to 1,117,072 between the 2000 and 2015. 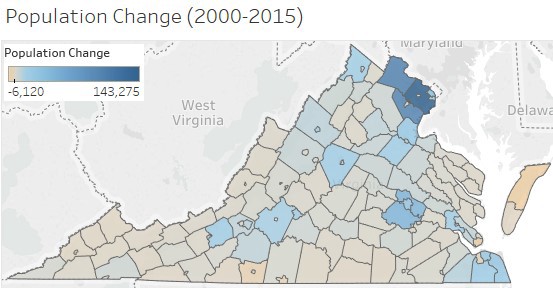 It’s tempting to just say the unique qualities of each candidate accounts for the change in support, but these are clear trends in the commonwealth that have occurred throughout the past 15 years across a number of races with varying candidate and issue dynamics. 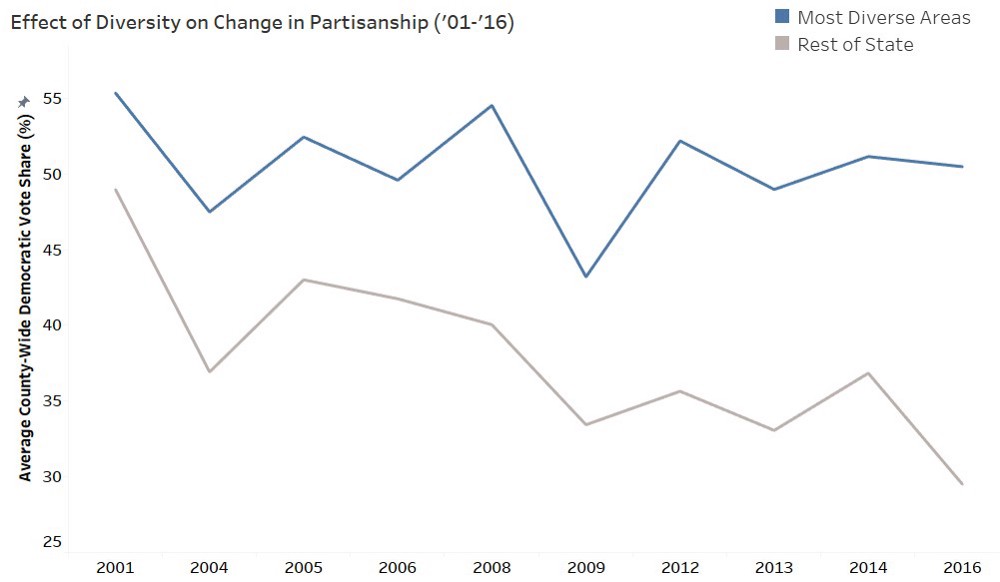 Don’t Draw Back from Diversity

Virginia Democrats need to approach the 2017 statewide races with a strong appreciation for the diversity and population trends that have helped the party win all five statewide offices. That’s not to say we shouldn’t care about economic inequality or the minimum wage (because by the way economic issues matter to people of color too). But if Democrats try to run away from our supporters’ racial diversity, the party will fail to take advantage of strong demographic tailwinds.