Americans don’t like to think of ourselves as racists - even when we acknowledge the existence of racism in the country. That’s not terribly controversial, but some data¹ published by the Pew Research Center in 2016 illustrates the divide by asking a battery of questions about areas where blacks are treated unfairly compared to whites. Half of respondents were asked about racism in their own communities and half were asked about racism in the country as a whole. This post doesn’t go so far as to assign causality to differences in perceptions of racial unfairness, the differences between each measure are an interesting look at how people perceive race in their lives.

While there is generally heightened awareness that black Americans are treated less fairly in the criminal justice system and mortgage industry, people perceive lower levels of racism in the workplace, stores and restaurants, and in voting.

Additionally, Americans are definitely confident that their communities are doing better than the country as a whole when it comes to treating black people fairly in all of the aforementioned situations. For example, only 43-48% of Americans think their own local police are unfair to black people compared to 58-64% who think police nationwide are unfair to black people. That’s potentially problematic for criminal justice reform or any policies that promote racial equity. Voters may lack a sense of urgency around promoting racial equity if they think things are fine where they live. 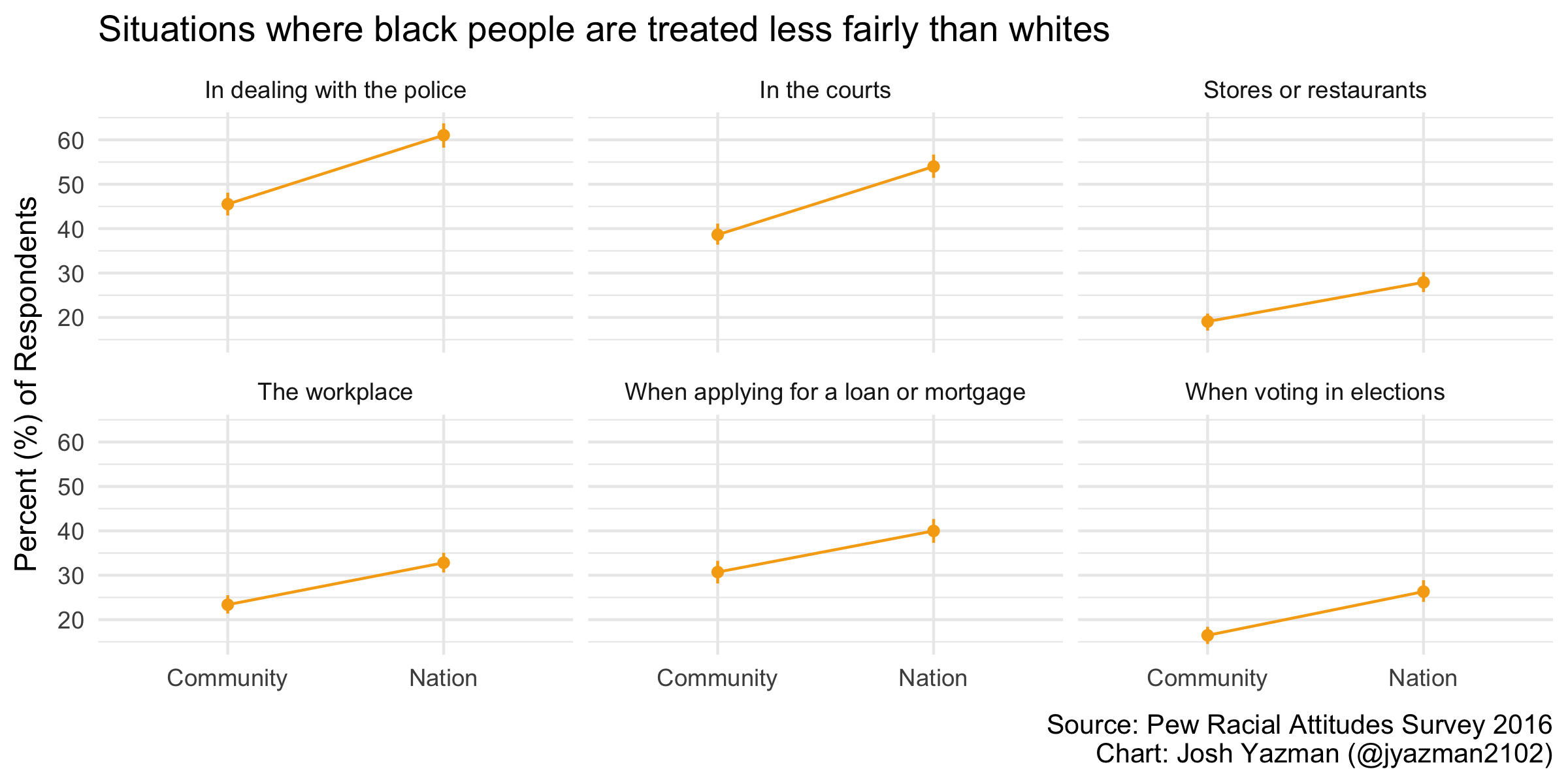 These differences are often more pronounced among white Americans than black Americans - particularly on issues of criminal justice and housing. Around three fourths of African Americans feel black people are treated less fairly than whites in courts in their own communities and overall while white Americans give their home communities about 17% more credit than the nation as a whole.

On all six measures, whites are less likely to feel that blacks are treated unfairly than blacks feel themselves. For example, only 35-41% of whites feel that blacks are treated unfairly by police in their communities compared to 71-78% of blacks who feel they are treated unfairly by their hometown police. Some of this can likely be explained by racial sorting - black people have, for decades, been denied access to loans in predominantly white neighborhoods - but the difference is likely also due to lived experiences. It’s hard to think your company has discriminatory hiring practices if you’ve never experienced them yourself even though many still do.

Age differentials are less severe, though still evident. Most age groups follow similar patterns of belief that their communities are less unfair to black people than the country as a whole. The main difference here comes from the baseline perception of unfairness. Younger citizens are more likely to feel blacks are treated unfairly across the board than older citizens. 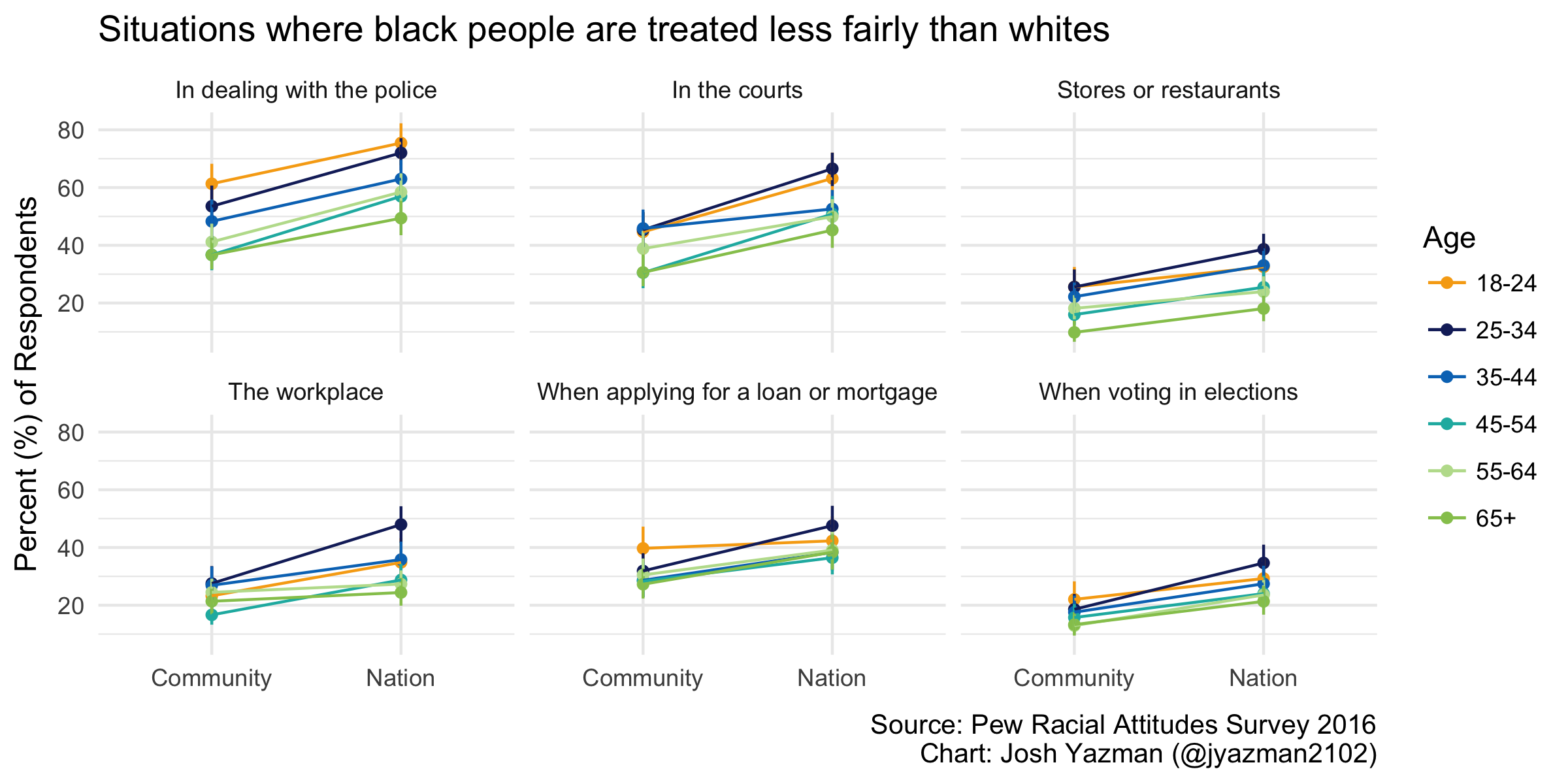 Regional differences exist, but are not as stark as I expected. The Northeast and West hold fairly high opinions of themselves compared to the rest of the country, which may or may not be justified by real world evidence.

According to the Washington Post officer involved shootings are a nationwide phenomenon including cases like Eric Garner in New York, Walter Scott shooting in South Carolina, Alton Sterling in Louisiana, Tamir Rice in Ohio, Philando Castile in Minnesota, and Stephon Clark in California. On the other hand, when it comes to voting rights, many of the nation’s most restrictive voter ID laws are concentrated in southern states, so maybe the Northeast and West have a point there.

The smallest gaps between community and national perceptions of unfairness towards black people is in housing. Cities big and small still grapple with the legacy of redlining and still use “exclusionary zoning” and other subversive tactics like “real estate steering” to unofficially segregate black and white Americans. 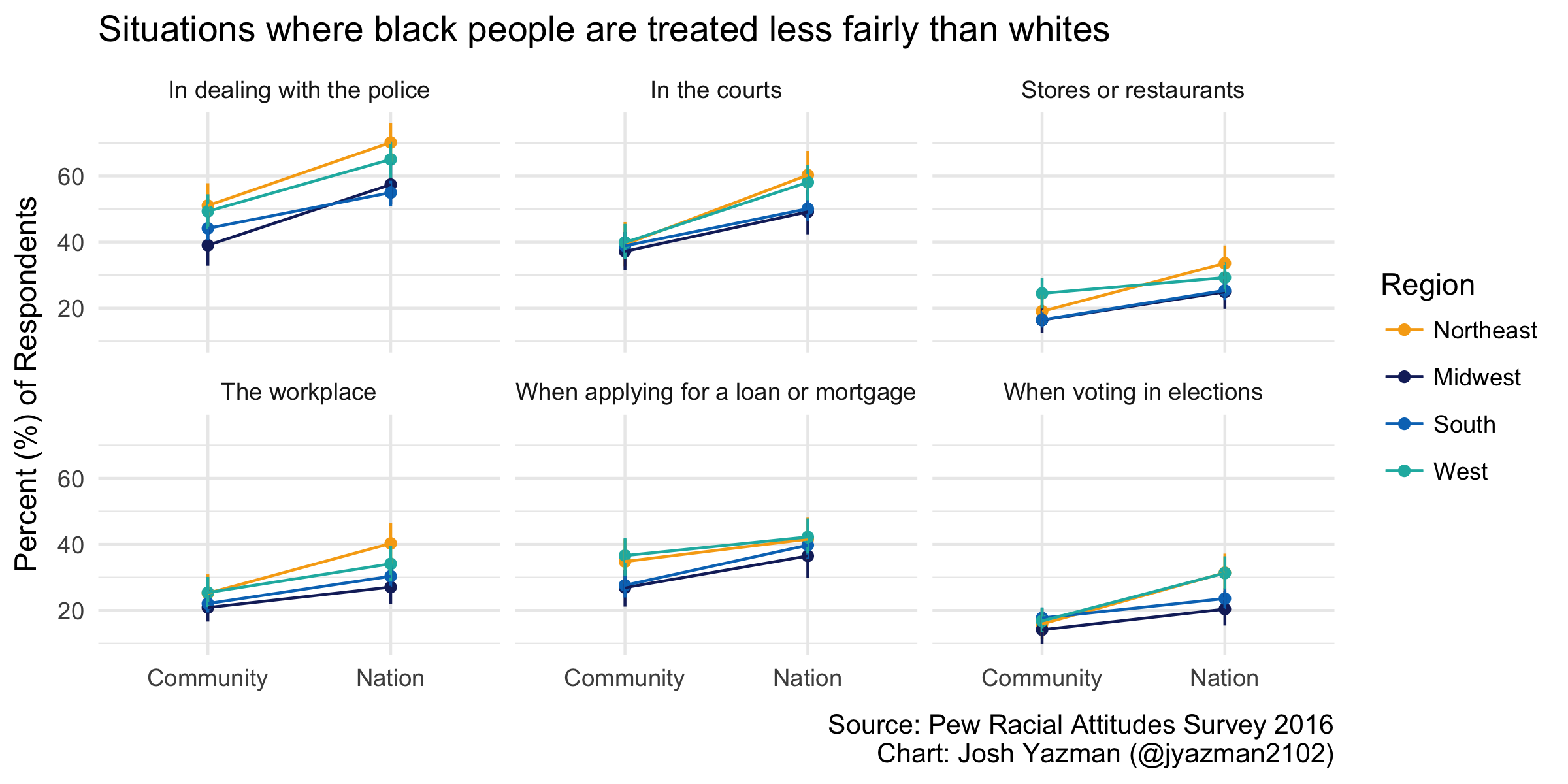 Unsurprisingly, more conservative Americans are less likely to to think black Americans are treated unfairly across all six scenarios. The real interesting difference is in the consistency of views among those with stronger ideologies. Conservatives feel that racial unfairness is rare in their communities and rare in the country as a whole while very liberal respondents see racial unfairness in both areas. Those in the middle fit the initial pattern of feelign that racism is more of a problem in the country than in the community.

One clear pattern in this survey is that Americans see their own communities in a much rosier light than the nation as a whole. Maybe this means people are willing to acknowledge that racial unfairness exists, but don’t want to take responsibility for it, as in the case of white Americans’ perceptions of the criminal justice system. Maybe these feelings are justified, like regional perceptions of racial unfairness in voting systems. Much more in depth research is necessary to unpack the causes of the patterns presented in this post. But these differences are interesting in their own right as a window into how people see themselves relative to their fellow citizens when it comes to racial justice.