FIveThirtyEight recently released their newest batch of soccer power index (SPI) ratings for over 400 soccer teams around the world. I don’t know much about soccer, but I love data and enjoy the occasional game when it’s on, so I copied the scores into an Excel file, cleaned up the data a bit and loaded it into R to see what I could learn! Code for preparing the data and visuals is included below.

First, I read the data into R. Then I looped through each unique league and calculated the pairwise difference in SPI for each league. Finally, I combined all of the individual league data frames into one.

The first metric I want to look at is overall competitiveness of each league by examining distributions of pair-wise differences in SPI. To visualize this, I used a ridgeline plot from the ggridges package which stacks distribution plots broken out by category on top of one another. Major League Soccer in the US appears to have a normal distribution where most teams have similar SPIs and just a few teams are really terrible or really great. On the contrary, Italy’s Serie A and the British Premier League have much broader distributions of scores. There are some really bad teams and some fantastic teams! Overall, almost every league appears to center around fairly small pairwise SPI differences. 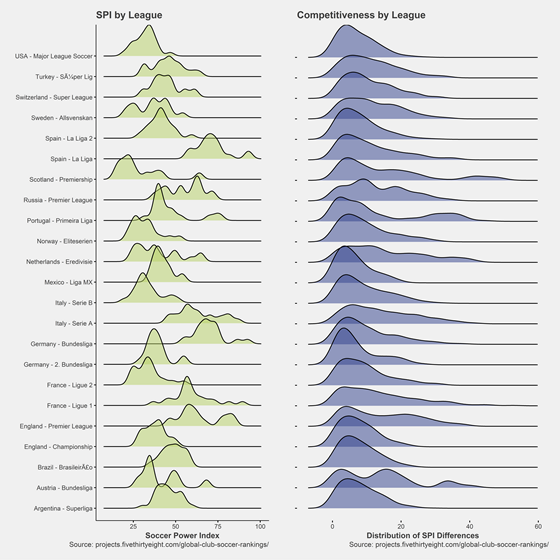 Deep Dive into a Few Leagues

The US’s MLS and England’s Premier League stand out as examples of interesting distributions along each score. Next we can use heatmaps (geom_tile) to dive deep into these leagues and see which teams are rising above the rest. 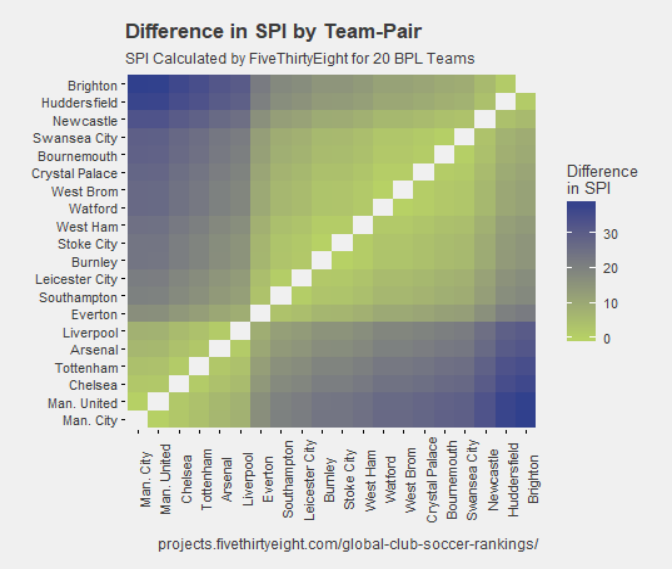 MLS teams are much less polarized. The bulk of the heatmap is greenish — indicating that most teams aren’t that different from one another in terms of SPI. If there is a standout team, it’s Toronto FC. 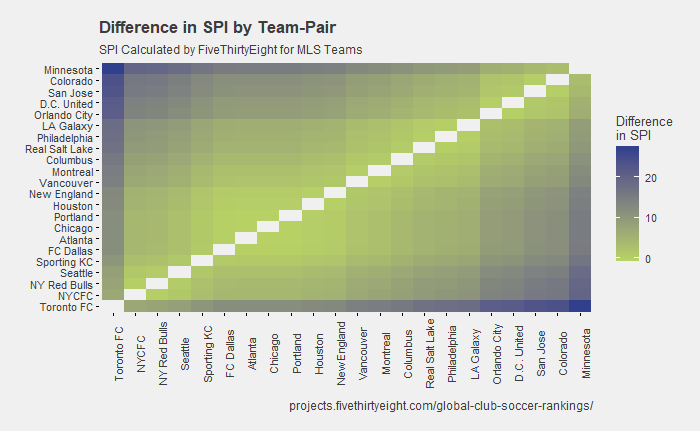 If you’re deciding which leagues might be most exciting to watch, one way to make that judgement is to compare SPI to differences in SPI. Ideally, I want to watch competitive soccer with good teams. 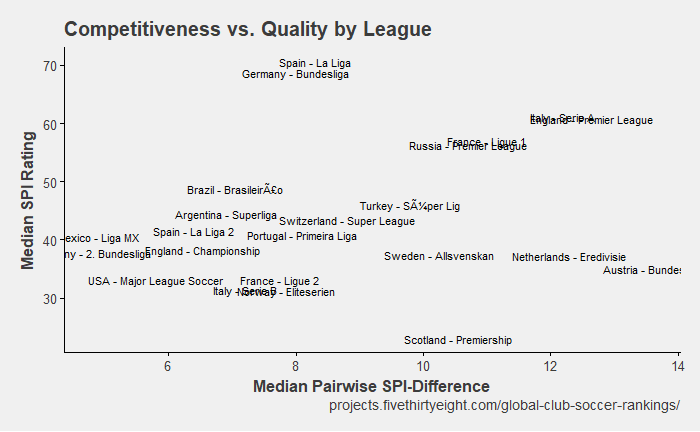 The teams in the top-left quadrant of the Competitiveness by League plot have the highest SPI ratings and the lowest differences between them. Spain’s La Liga, and Germany’s Bundesliga are the most exciting leagues to watch by this criteria. That doesn’t mean there won’t be fun games to watch from the British Premier League or MLS, but the best balances of competition and fun come from Germany and Spain right now.